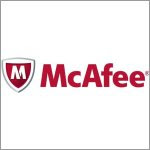 With the New Year fast approaching, tech enthusiasts are very excited about all of the latest technology that is being introduced in 2011, but what about the possible security concerns that come with all the new technology? On Tuesday, December 28, 2010, McAfee released their 2011 list of threat predictions. The company said, “The list comprises [the] most buzzed about platforms and services, including Google’s Android, Apple’s iPhone, Foursquare, Google TV and the Mac OS X platform, which are all expected to become major targets for cybercriminals.”

“We’ve seen significant advancements in device and social network adoption, placing a bulls-eye on the platforms and services users are embracing the most,” said Vincent Weafer, senior vice president of McAfee Labs, in a statement. “These platforms and services have become very popular in a short amount of time, and we’re already seeing a significant increase in vulnerabilities, attacks and data loss.”

McAfee will have to work especially hard to fend off the increasingly sophisticated malware that will be targeting Apple in 2011. So far, the Apple Mac OS platform has been decently secure, said McAfee. The iPhone and iPad are growing increasingly popular in the business realm though, and McAfee is afraid that with the general lack of knowledge about how to secure these Apple devices Apple botnets and Trojans could be a frequent occurrence and become a serious issue.

The biggest thing that people need to be really careful about is social networking sites. McAfee said that sites like Twitter and Facebook can easily fall prey to problems like URL shortening scans. They continued saying that they knew that utilizing abbreviated links does make it easier to condense your 140 character limit Tweets, but sometimes these links are also an easy way for criminals to mask and direct users to malicious Web sites. Each minute there are more than 3,000 tiny URLs created. Due to these astronomical numbers, McAfee said that they expect to see an increasing number of URLs that will be utilized for spam, scamming, and other malicious purposes.

Although a recent study showed that only 4 percent of adults really use location-based services, companies are continuing to release location-based features including Foursquare, Google Latitude, Facebook Places, and more. McAfee warns that the information that is shared on sites like these could easily enable cyber criminals to formulate a targeted attack. They also predicted that in 2011 there will be an increase in the use of this type of tactic across most of the popular social networking sites.

A lot of these location-based services that people utilize are used via their mobile phones. Because of this, McAfee is also predicting a “rapid escalation” in the number of mobile attacks due to “widespread adoption of mobile devices in business environments, combined with historically fragile cellular infrastructure and slow strides toward encryption.”

McAfee also said that the increased use of Internet TV connections could pose a serious security risk. If manufacturers just rush into releasing their products, they could run into some major issues with suspicious and malicious apps on platforms such as a Google TV device. “These apps will target or expose privacy and identity data and will allow cybercriminals to manipulate a variety of physical devices through compromised or controlled apps, eventually raising the effectiveness of botnets,” McAfee said.

These weren’t the only things that McAfee had on the threat list that they released. The list also included:

Hacktivism: McAfee is predicting that there will most definitely be a rise in the number of possibly politically motivated cyber attacks. “More groups will repeat the WikiLeaks example,” McAfee said. They continued saying that unlike WikiLeaks though, the strategy will be much more sophisticated and leverage social networks.

Friendly Fire: McAfee is saying that there will also be a rise in the use of malicious content that is disguised as an e-mail from a source that you know. There is “signed” malware that works to imitate legitimate files that McAfee is afraid will be much more prevalent. They also said that “friendly fire,” which is a threat that seems to come from your friends but really is a virus such as Koobface or VBMania, will become a much more prevalent choice by cybercriminals. McAfee also said that these attacks go hand-in-hand with social network attacks and that these social network attacks could quite possibly eventually overtake e-mail attacks.

Botnets: McAfee Labs is predicting that with the merger of Zeus and SpyEye that there will be more sophisticated bots that will be produced because of the advancements for bypassing security mechanisms and law enforcement monitoring. McAfee Labs also says that they expect to see an increase in botnet activity that begins to adopt data-gathering and data removal functionality, instead of the more common use of sending spam.

Well, one thing that can definitely be taken from McAfee’s 2011 list of threats is that there are definitely threats out there that users want to avoid. Security is a big issue that many people tend to avoid, including myself. Protection and caution is necessary and is something that people really need to pay a little more attention to.

A Tech Travel Agent from Rentacomputer.com, the Worldwide Technology Rental Company will schedule installation of projectors, computers, and office equipment on a permanent or temporary basis in over 1000 cities worldwide. Call 800-736-8772

We have 3987 Installers, Technicians and Engineers stationed worldwide to serve you.