Breakthrough by IBM May Bring Us Exascale Supercomputers 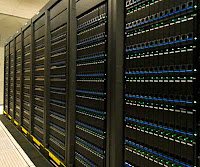 If you are one of the people out there that doesn’t think that a supercomputer seems good enough, then you probably work at IBM. Researchers at IBM have just made a breakthrough in using light pulses to help accelerate the transfer of data between chips. If this works out like the people at IBM think it will, then it could quite possibly increase supercomputer performance by more than a thousand times.

This technology, dubbed CMOS Integrated Silicon Nanophotonics (I feel smarter already), integrates optical modules as well as electrical modules on a single piece of silicon. This allows electrical signals created at the transistor level to be transformed into light pulses, seemingly allowing chips to communicate faster according to IBM silicon photonics research scientist Will Green.

According to Green, “In an exascale system, interconnects have to be able to push exabytes per second across the network. This is an interesting milestone for system builders who are looking at building exascale systems in 10 years.”

The possibility of integrating multiple photonics modules onto a single substrate or onto a motherboard is here, according to Green. Newer supercomputers already use optical technology for chips in order to communicate. However, this usually occurs at the rack level and mostly over a single wavelength. This breakthrough will allow optical communication simultaneously at multiple wavelengths.

The good thing about this technology is that it can be manufactured on a standard chip production line. Another benefit is that it also needs no special tools, making it extremely cost-effective. The current demonstration used a 130-nanometer CMOS manufacturing node. However, IBM plans on pursuing integration into “deeply scaled sub-100 nanometer CMOS processes,” according to Green.

The technology aims to replace copper wires. As you know, copper wires are widely used today for data transfer between chips. Optics can get a speed increase for distances as short as a few centimeters to as long as a few miles and even consumes less power. Eventually, IBM hopes to use optics for on-chip communication between transistors as well. According to Green, “There is a vision for the chip level, but that is not what we are claiming today.”

A Laptop Rental is perfect if you are hosting a classroom training session or if you are just headed to another convention. Take the hassle out of your business trip. Rentacomputer.com has been offering quality laptop rentals for over 20 years to more than 1000 cities worldwide.
Tags No Tags