"Revolution: The First 2000 Years of Computing" Exhibit Opens at the Computer History Museum 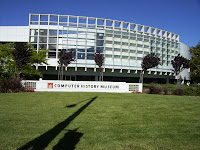 Whether it be art museums, history museums, museums that focus on a specific event in history or some other kind, people love going to museums. However, the majority of museums are generally more fun for the elderly, buffs of the certain genre or elementary school field trips. But there is one museum that caters to a different type of visitor, a more technological visitor, the Computer History Museum, and this week they have something new for all the tech junkies out there.

This week the Computer History Museum opened a $19 million, 25,000-square-foot expansion with a new signature exhibition known as “Revolution: The First 2000 Years of Computing.” This new exhibit, after being in development for over six years, represents the most comprehensive physical and online exploration of computing history in the world. It spans everything from the abacus and slide rules all the way to robots, Pong and the Internet.

According to John Hollar, CEO of the museum located in Mountain View, California, “Many times, people coming to the museum have very basic questions: ‘How did that computer on my desk get there? How did that phone I’ve used for so long get smart?’ It’s an exhibition that’s primarily aimed at a non-technical audience, though there’s a ton of great history and information for the technical audience as well.”

The exhibition has been specifically designed to be accessible to visitors in a multitude of ways. This includes documents, video presentations, over 5,000 images and 1,100 artifacts in 19 galleries. The exhibit also features hands-on interactive stations that will demonstrate the principles of computing like being able to pick up a 24lb Osbourne computer or playing a game of Pong, Pacman or Spacewar.

There are many key artifacts in the exhibit including a 1956 IBM 305 computer as well as its 350 hard drive, the first commercially available machine of its type which practically took up an entire room and only held 5MB of data. Guests will also get to see the console of a 1950 Univac 1, the first household computer, a complete installation of the original IBM System/360, the dominate technology in mainframe computing for nearly 20 years and a Cray-1 supercomputer which was the world’s fastest from 1976 to 1982.

Guests will even get the opportunity to see “The Utah Teapot”, the device graphics designer pioneer Martin Newell used as his 3D computer model at the University of Utah. The teapot became the standard reference for computer graphics and the more realistic the designers could make the teapot, the better their graphics engine was considered. The ENIAC, which was built during World War II and was the world’s first large-scale computer to run at electronic speed, is also on display.

“This is one of the greatest electronic computers ever invented,” stated Holler. “We’ve made this a very human story. We’ve tried to talk about not just what happened, but what mattered in history. What mattered often boils down to the people who were the great innovators and the problems they were trying to solve, and so much of the exhibit is devoted to those important stories.”

The ceremonial opening, which took place yesterday, contained a number of technological legends like Apple co-founder and engineer Steve Wozniak, computer programming pioneer Donald Knuth, video game inventors Al Alcorn and Steve Russell and IBM’s first female fellow Fran Allen. The galleries of the exhibit will have many legends of the computing world speak as part of a series entitled “Revolutionaries”.

Guest can also partake of an oral history program with over 40 interactive stations featuring the legends of computing. The stations will contain archived interviews with pioneers like Chuck Thacker from Xerox’s Palo Alto Research Center and John Atanasoff who built the first digital computer in 1939. Holler added, “We often say, ‘wouldn’t it have been great to have been able to talk to Michelangelo as he painted the Sistine Chapel?’ We can do that.”

The exhibit is open now and is sure to be the highlight of any computer or tech lover’s trip to the museum. If you love technology, history, computers or all of the above, then this is one place you have to visit before you die. Put it on your bucket list or tattoo it to the inside of your eyelids. Do whatever it takes to remember to go and see this exhibit.

Power Point Projectors
Most business class projectors will do a good job of displaying your PowerPoint presentation. If you have a small presentation group, a 2000 lumen LCD projector will be able to produce a nice and clear picture. For larger audiences you should consider a 5000 lumen LCD projector. Visit the Worldwide Technology Rental Company…Rentacomputer.com
Tags No Tags